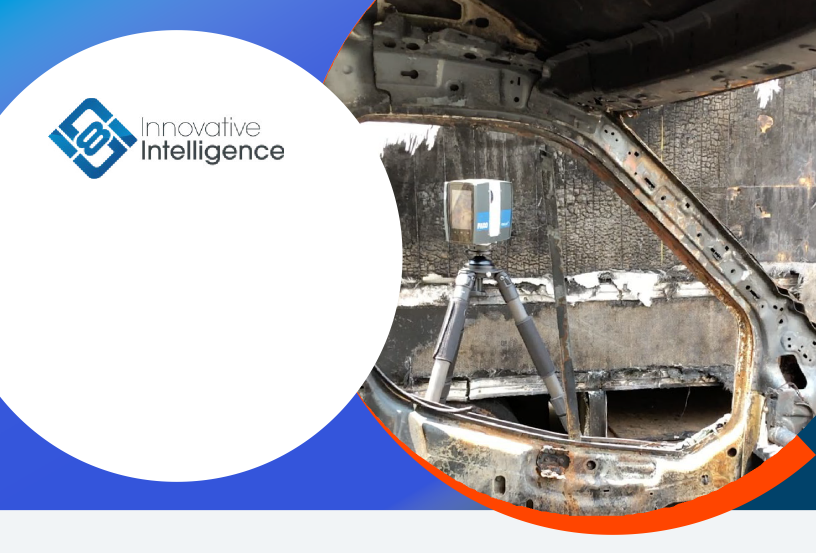 FARO® Empowers Innovative Intelligence with Comprehensive& Accurate 3D Investigative EvidenceThe ability to present unbiased, accurate 3D data in the courtroom as opposed to conventional 2D evidence can make all the difference in the outcome of a case.

The ability to present unbiased, accurate 3D data in the courtroom as opposed to conventional 2D evidence can make all the difference in the outcome of a case.While still photographs, manual measurements, and written reports have been widely accepted as standard procedure, they often offer a limited perspective of a crime, crash, or fire scene that could be laden with information bias. When called upon, investigators (whether public or private) are tasked to seek and present the truth for their clients. For the most part, they only have a single opportunity to document evidence that is relevant and critical to the case, and they must ensure that the collected evidence stands up to scrutiny in court.For private investigation company Innovative Intelligence, the ability to quickly and accurately deliver crucial evidence for their clients’ investigations is paramount to cementing their success in an industry where credibility is key. Based in Auckland, New Zealand, Innovative Intelligence offers nationwide private and corporate investigation services — such as criminal and claims investigations.

Recognizing the Need for Change

Familiar with the struggles of evidence collection, the team at Innovative Intelligence saw great value in capturing scenes in 3D detail, so they embarked on a journey to find a solution that would both improve their work processes and ensure the validity of their findings.Drones were initially adopted for overhead captures, which helped the team to provide context and perspective for investigation scenes that spanned a large area. However, this failed to sufficiently document and preserve the details in the scene. The team relied on conventional methods like cameras for scene captures, and employed laborious methods like tapeand laser measures for cases that required accurate measurements.Frustrated, the team went on to research advanced 3D scanning solutions that were available in the market. After going through reviews on forums, the company made a decision to get in touch with FARO to learn more about its 3D laser scanners and software, and the rest was history. 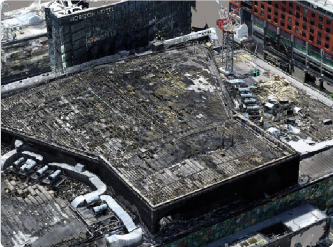 Drones provide context and perspective of the extent of damage in fire investigations, but other tools and methods are required to preserve finer details. 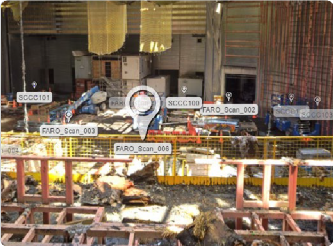 A primary concern for Innovative Intelligence was to be able to obtain accurate measurements that would stand up in court. This would reduce contention over investigative evidence presented by the company on behalf of their clients. In addition, the team also desired solutions that were easy to use as none of them had prior experience with 3D scanning technology.The team eventually invested in the FARO® FocusM 70 Laser Scanner, FARO® ScanPlan™ 2D Handheld Mapper, FARO® SCENE Software, and FARO® Zone 3D Software— a suite of solutions that significantly enhanced their capabilities and expanded the range of services they could offer their clients.Details in most investigation scenes like apartments, vehicles, and fire sites can now be digitally captured in 3D with the FocusM 70, which proved especially useful for cases of arson, fatal accidents, and sexual assault, where precise data analysis is key. Separately, the ScanPlan is employed to offer visualizations of a scene in 2D for cases like burglaries, or to offer a snapshot of an apartment complex’s floorplan to complement the detailed scans done with the FocusM 70. 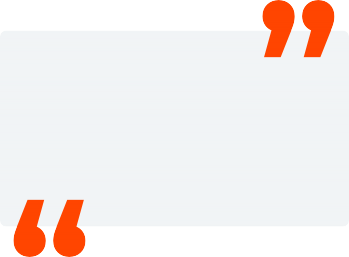 “Besides the various benefits of the FARO hardware and software, what really swung our decision was FARO’s offer to provide a technical expert’s support if ever a situation arises where our scans are challenged in court.”

Soon after adopting the FARO solutions, Innovative Intelligence’s capabilities rose to prominence among both private and public sectors due to its involvement in the investigation of a high-profile fire accident. The company was engaged by an insurance firm to digitize the damage to the roof and top floor of the SkyCity Convention Centre in Auckland, New Zealand, which was still under construction at the time. Probably the biggest commercial fire incident in New Zealand, the SkyCity fire burned for three days and caused the city centre to come to a standstill with multiple road and business closures. Hamish and his team were allowed on scene once the fire was contained.Dangerous post-fire conditions would have made documenting the large, complex scenes in a timely manner very difficult. However, the FocusM 70 Laser Scanner enabled the Innovative Intelligence team to capture all the required scenes within just 6 hours on- site — at a rate of up to 488,000 points/second. With a combination of the most advanced sensor technologies available, the adaptable FocusM 70 allowed the team to capture various scenes, whether in bright sun or in complete darkness, and allowed them to verify and make adjustments immediately to ensure a high-quality scan data end product. Speaking about the efficiency of the FARO laser scanner, Hamish shared, “If we had used photographs and conventional methods for measurements, we would not have been able to capture the number of scenes we had with the laser scanner and at the same level of detail.” As a result of the scenes captured, InnovativeIntelligence was able to scientifically and forensically recreate the scene and produce a 3D, to-scale replication of the fire site and a Scene2Go viewer to assist in the investigation into the cause of the fire. Insurers and investigators who could not be physically present at the fire site were now able to visualize and assess the damages — and even deduce the cause of the fire incident. These outputs were shared across multiple agencies, including the fire and police departments, and major insurers to assist in all aspects of the inquiry. 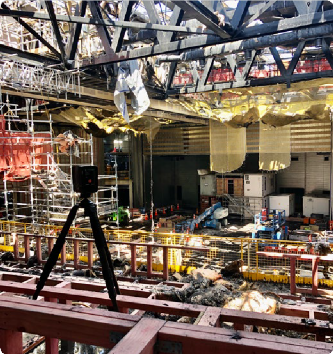 Innovative Intelligence utilized the FocusM 70 Laser Scanner to capture accurate 3D details of the fire damage to the top floor of the SkyCity Convention Centre in Auckland, New Zealand. 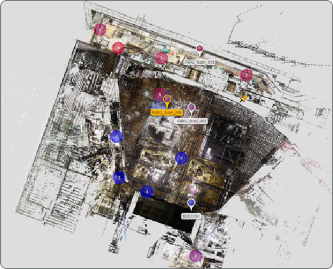 With FARO’s FocusM 70 Laser Scanner, Innovative Intelligence is able to efficiently capture a 3D representation of a scene as it is at the time of the scan and record everything visible as data points — with just one scan. This point cloud data can later be used to digitally take measurements, create diagrams, animate the scene, and present “walk-throughs” for courtroom presentations .“Our FARO laser scanners and software have given us greater confidence that we’ve captured the investigation scene quickly and effectively,” sharedHamish. “Previously, we would spend an entire day in a three-bedroom apartment to capture all the details in the scene. But with the laser scanner, you know you’ve captured the scene thoroughly — inside and out — within just two to three hours.”Empowered by the FARO solutions, the company has been able to bring together various tools of the trade, such as merging point cloud data from different sources with the FARO laser scan data, to accurately reconstruct an incident and provide a fuller picture. This has boosted the company’s reputation for delivering realistic and compelling results for courtroom exhibits and claims investigations.“Recreating a scene digitally and offering 3D perspectives as demonstrative evidence can aid with the visualization of where things are. There is just less ambiguity compared to still photographs as the evidence speaks for itself,” added Hamish.Besides offering investigation services, Innovative Intelligence is now also equipped to provide specialized services where laser scanning is utilized to map and preserve actual scenes in 3D — with detailed information within centimeter accuracy. Indeed, the way that investigations and evidence collections are done has been thoroughly transformed with advanced technologies like FARO’s 3D laser scanners. And increasingly, law enforcement and forensics communities around the world have also begun to accept the use of laser scanners in investigative work. Greater efficiencies and advantages can be realized as the information required by investigators is readily accessible — now and in the future, regardless of what happens to the evidence or a scene.